While no one wants to get hurt at work, if you do, physical therapy is one of the best choices you can make for healing and rehabilitation.
When you’re treated by a physical rehabilitation doctors in Brooklyn you work toward resuming your normal daily activities, which includes being able to safely return to work as soon as possible.
Workers comp physical therapy can be used for any number of injuries, ranging from torn muscles to fracture recovery and even to dance injuries, if they occur while you’re on the job.

Getting hurt on the job is a risk many workers face every day. Fortunately, employers and doctors understand the positive outcomes for injured workers who undergo physical therapy (PT) following an injury. PT helps you get back on the job quicker. It’s a helpful process that keeps you from sitting around just waiting to heal and possibly even hurting yourself further. And your physical therapist has a wealth of knowledge to share with you about how you could prevent future damage … and lost work.

In most places of business, workers’ compensation provides coverage for any medical treatment needed after you sustain an injury on the job. This is especially important when your job is physically demanding and you’re at a high risk of injury. Workers’ comp includes physical therapy. 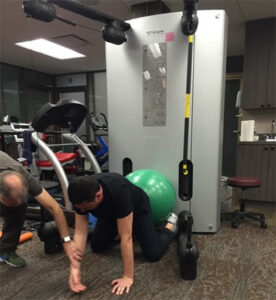 Slips, trips and falls are among the most common types of work-related injuries. They can happen just about anywhere. Even when you follow all the safety rules or are in a position that usually isn’t thought to be high risk for getting hurt, accidents happen.

Falls are the most common work-related injuries. And the damage from falls is very often treatable through a rigorous rehabilitation and recovery period of physical therapy, even if you needed surgery to repair a fracture. Falls can occur up or down stairs, on wet surfaces or by tripping over unexpected holes or debris. Falls can cause damage to all over the body depending on the area that was most impacted in the accident. Without proper care and attention to the injury, the damage can create negative lingering effects on the body.

Other common injuries that benefit greatly from physical therapy treatments for damage that happens while you’re on the job include:

Let us help you defeat your pain

Call for your appointment NOW

Can Physiotherapy Help With Work-Related Injuries?

Yes, physiotherapy can be an effective treatment for many work-related injuries. Physiotherapists can help to reduce pain and inflammation, improve movement and function, and help prevent further injury. This can be done through a combination of techniques including exercise, manual therapy, and education. One of the main benefits of physiotherapy is that it addresses the underlying causes of an injury, rather than just treating the symptoms. Physiotherapists will conduct a thorough assessment of the injury to determine the root cause and create a personalized treatment plan to address it. For example, if the injury is caused by poor posture, the physiotherapist will work with the patient to improve posture and strengthen the muscles that support it. They will also provide education on how to maintain good posture in the workplace and prevent future injuries.

Another benefit of physiotherapy is that it can help to speed up the healing process. Through the use of manual therapy, physiotherapists can reduce pain and inflammation and increase blood flow to the injured area. This can help to reduce the amount of time it takes for the injury to heal. Physiotherapy can help employees to return to work quickly and safely. A physiotherapist can work with an employee to create a return-to-work plan that accommodates their injury and helps them to perform their job safely.

Both you and your employer want you to be restored to complete health and full function after a work injury. There are several benefits to participating in physical therapy as part of your plan for rehabilitation.

Physical therapy, as practiced by the best rated Brooklyn PT doctors, may actually end up improving your life overall.
You can learn a lot from your physical therapist at physical therapy clinic in Brooklyn. He can train you on how to properly stand and pick up heavy objects. You may discover an exercise regimen that you can continue once your PT time is over. And you may even develop better-eating habits and lose weight if you need to!

Other benefits of physical therapy include:

What is Workers’ Compensation?

Workers’ Compensation is a system that provides monetary and medical benefits to employees who are injured or become ill as a result of their job. This can include coverage for medical expenses, lost wages, and other benefits. It is a no-fault system, which means that the employee does not need to prove that their employer was at fault for the injury or illness.

Yes, Workers’ Compensation covers long-term problems and illnesses that are caused by an employee’s job. These can include conditions such as carpal tunnel syndrome, back problems, and respiratory issues.

Are All Employees Covered By Workers’ Compensation?

In New York, almost all employees are covered by Workers’ Compensation. However, there are some exceptions such as independent contractors, domestic workers, and some agricultural workers.

Who pays for Workers’ Compensation in New York?

Employers are responsible for paying for Workers’ Compensation in New York. They can do this by purchasing insurance from an insurance company, self-insuring, or joining a group self-insurance fund.

How much do you get for Workers’ Compensation in New York?

The amount of benefits you receive for Workers’ Compensation in New York will depend on the specific circumstances of your case. For example, the amount of lost wages you are entitled to will be based on your average weekly wage, and the amount of medical expenses will depend on the treatment you require. In general, New York laws provide payment for up to two-thirds of the employee’s average weekly wage, and also provide for medical expenses and any other costs related to the injury/ illness.